Gideon Lewdon, newest Knight of Marie Teaser, surveyed the columns moving in the valley below. 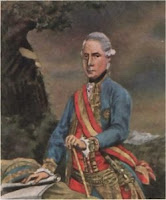 The fortifications would easily hold for the summer, whether or not they could weather all of autumn or into winter was another question altogether.

The Altmoranian attempt at storming had not worked and now siegeworks were in progress, ultimately the Altmoranians were also not ready for an extended siege it would seem as their heavy ordinance was not in place and the supplies for keeping such a large force static were going to have to run thru some mountain passes.

This was where Brigadier Lewdon came in, Maj. General Done had set him the task of harrassing these supplies. First the Hussars would have to work with local Jagers and Grenzer formations in determining the routes of Altmoranian supplies. Once these were found then his new columns could be brought into action!
Posted by MurdocK at 5:48 PM

I remember play testing "Festung Krieg," (one of the Koenig's Krieg sets). It is a very nice and playable siege game.
Probably my best performance ever on the table top!
Good luck to Lewdon (and may we hope for a game report soon?)
:)
A

I know that you're interested in sieges . . . Duffy has a book on siege warfare called . . .

Here's a link to it on Amazon.ca:

If you want it, let me know since I'm always ordering from them and I can pick it up for you without having a shipping charge.

Looking forward to read and enjoy reports of these very differebnt actions...
Jean-Louis

Actually, Duffy also has another good text out on sieges now too ... haven't read it yet myself, but I've heard nothing but good about it ...
:)
A