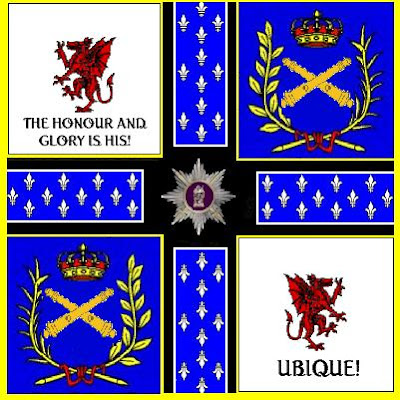 Reich Duke Wilhelm envisions this legion to grow to four infantry battalions, two cavalry regiments and a battery of excellent artillery. Any nation wishing to volunteer a unit can be assured they will be provided the finest uniforms, flags, and equipment of the native country. President K. Rapp of the Republic of Neues Sudland has approved his 4th Regiment of Dragoons to serve as the senior regiment in our Foreign Legion. King Phillip I of the The Holy Mormoan Kingdom has also approved two troops of the Bree's Battery, Royal Regiment Of New Wales Artillery, to join the Beerstein Foreign Legion. Reich Duke Wilhelm has commissioned a new flag to honor Bree's Battery in their service with his army. All of Beerstein awaits these heroes and seeks other realms to nominate units for the Foreign Legion.
Posted by Capt Bill at 1:19 AM

Fire at Will said...

In keeping with our contractual arrangements with the Empire, the Frundsberg Frei Stadt will provide an infantry battalion, subject to the usual contractual commitments, etc...

Baron Wilhelm,
Thanks for your generous offer. Please provide what uniform and flag your troops require...

Generous Sir, let me guess you would take into consideration the incorporation into your Foreign Brigade of some contingents of this little, almost ignote Principate in the far South: http://soldadets.blogspot.com/
I can ensure you them to be rather tough people, Sir: stubborn while in defence and temerary at attack. Entirely trustful!

Given the plethora of second sons or maybe sons of our nobility, the Hurtshog would be pleased to permit Frei Herr Hurlup Braunswieger-Yech, Inhaber of the The Bad Rotten Muskytears, to complete the organization of his unit in your service.
Coats = lime green with red turnbacks and cuffs,
Tricorne = red with white feather and gold lace when on parade, troops permitted to replace with own hats when on other duty.
Waist coat & tunic = white
Trews = white
Gaiters = white on parade, black or brown in field.

Lovely flag...
A last news: the great-grandsons of your 'kaiserlicks' have routed the French at Lindenau
http://rafa-pardo-almudi.blogspot.com/2009/05/gyulai-crushes-marmont.htmlRafa