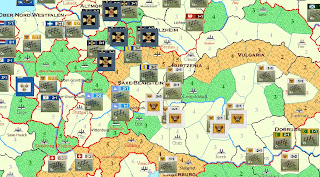 The Seven Years Warz game in Cyberboard has been something of a progress that I have been working towards for some time.

Now I have many working parts and have some progress moving forward.

Look for further reports here and on Emperor vs. Elector...
Posted by MurdocK at 7:44 PM