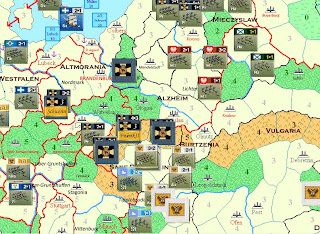 Unable to hold them back in the mountain passes the Bearstein troops retreated with casualties.

They have been joined in Pilsner (capitol of Saxe-Bearstein) by Butrzenia forces in great numbers with Kannon from Wein. Rumor has it that the Great Field Marshelle Daun is present with these forces.

Certainly a titanic early fight is brewing in Bearstein!
Posted by MurdocK at 10:31 PM

Great use of the geography of 'Eveurope', and very promising.
Good to see Butrzenia involved again - cheer the tricornes!

I'm specially intrigued with Altmoriana: Mieczislaw, Saxe-Bearstein, Burtzenia, Boyardvina... we knew from the 'Wars for Acadian Glory'. Other names are veteran 'EvE' countries; but Altmoriana sounds really new. So much the more as I have a vague memory of seeing (though recently! 'Old age is a shipwreck'...) of forces which, on the photo at least, seemed to wear an unusual hat???

Yes Altmorania is from a while ago.

I have used it as a 'prussia' fill in.

Is the 'hat' you are talking about the casquet? of Prussian use in 1806?